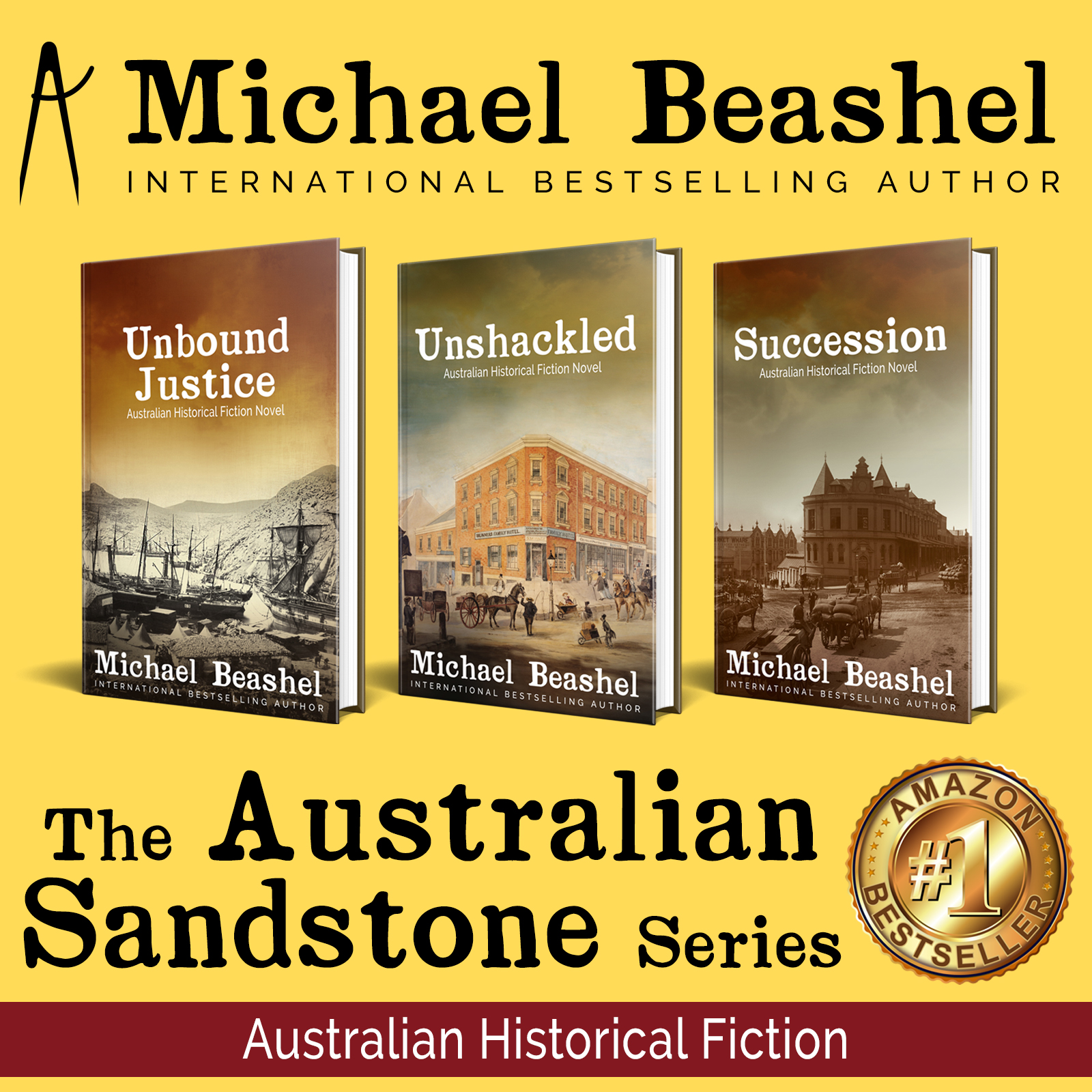 In the genre Australian Historical Fiction, The Australian Sandstone Series highlights life in the colony of New South Wales in the nineteenth century.

Unbound Justice, Unshackled and Succession, the first three books, span 37 years of Sydney in the second half of the 19 century. They follow the fortunes of 20-year-old John Leary, who in 1850 leaves his rural home in Ireland and sails as an assisted immigrant to the Colony of New South Wales.

Thanks to his skill as a carpenter, his hard work and the labour shortage due to the Gold Rush, he rises quickly in the building trade. His ambition is to have his own construction company. This he achieves, but his ambition proves boundless, and we are witness to his ruthless progress to become the biggest and the best. The building industry becomes a metaphor for the growing city with its mixture of squalor and grandeur, of corruption and high ideals.

These three books, both Australian historical drama and family saga, paint a vivid picture of 19c Sydney. Love, revenge, and tragedy all play a part in the fortunes of John Leary and his family and the wide cast of friends and enemies.

All novels in The Australian Sandstone Series can be enjoyed as standalone reads. 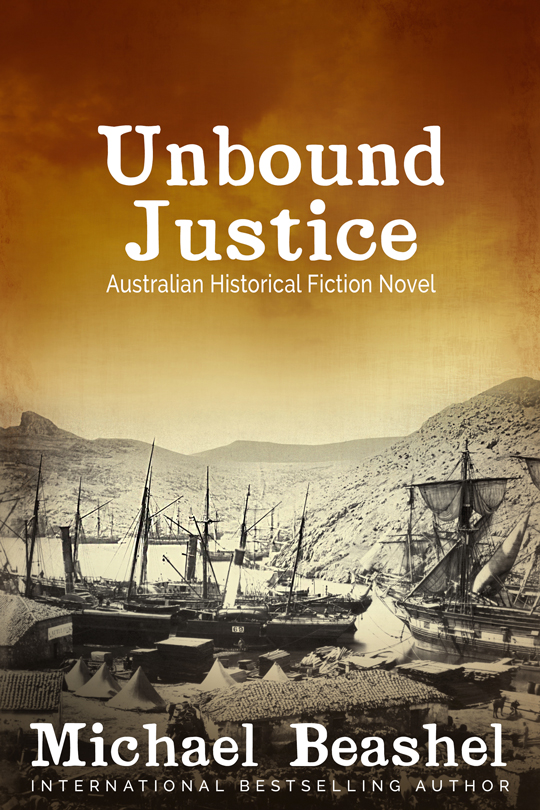 This is the first and Amazon ranked International Best Seller Australian Historical Fiction novel: a new, magnificent view of nineteenth-century Sydney from the ground up.

John Leary boards ship in Ireland in 1850, a young carpenter ambitious for a new life in Australia. He sails with revenge in his heart—his beloved sister has been raped by her landlord, William Baxterhouse, who escapes on another ship with even grander plans for success in New South Wales.

In Sydney, hard workers like Leary and ruthless newcomers like Baxterhouse find a city fired by the Gold Rush and dedicated to creating the finest buildings in the colony. Leary has a double motive to make his construction company succeed: he has fallen in love with the beautiful Clarissa McGuire, whose family despise him, and Baxterhouse continues to rise in wealth and influence, seemingly untouchable. Meanwhile another woman, Beth O’Hare, is in love with John Leary, and he makes some hard choices—including a climactic showdown with Baxterhouse. 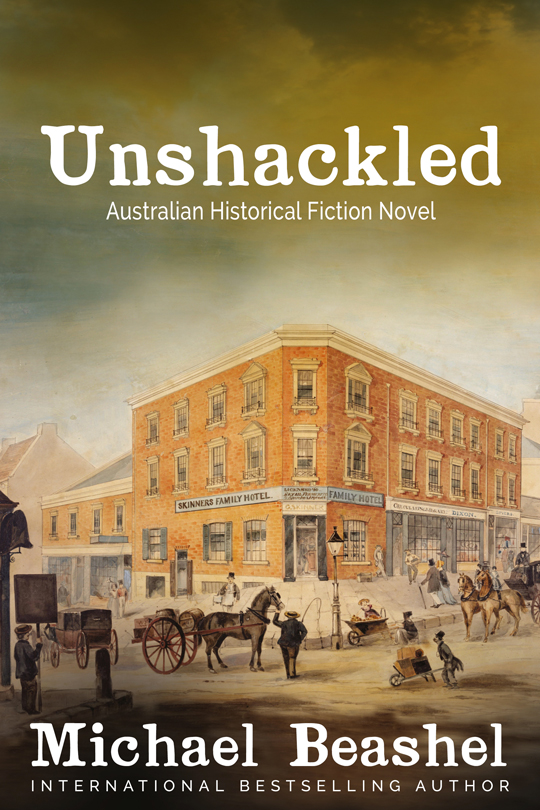 The second novel of The Australian Sandstone Series: continuing the saga of John Leary in nineteenth-century Sydney.

Sydney is booming in 1855 and life looks grand for John Leary: his construction dreams are coming true, his beloved wife Clarissa is expecting their first child, and, with his partner Sean Connaire, he has produced some of the city’s significant buildings. But success provokes jealousy, and a mysterious rival sabotages a vital Leary site.

John Leary cannot control his own company while his father-in-law holds a majority share, so he arranges a buyout on his own behalf—but this new, silent partner poses a serious risk to the harmony of his marriage. Meanwhile ex-convict Gerry Gleeson makes himself known to John as his uncle and helps him track down the saboteur.

Raw ambition, guilty secrets, and undercover deals—will they bring the young builder to ruin or triumph? Am Amazon best seller. 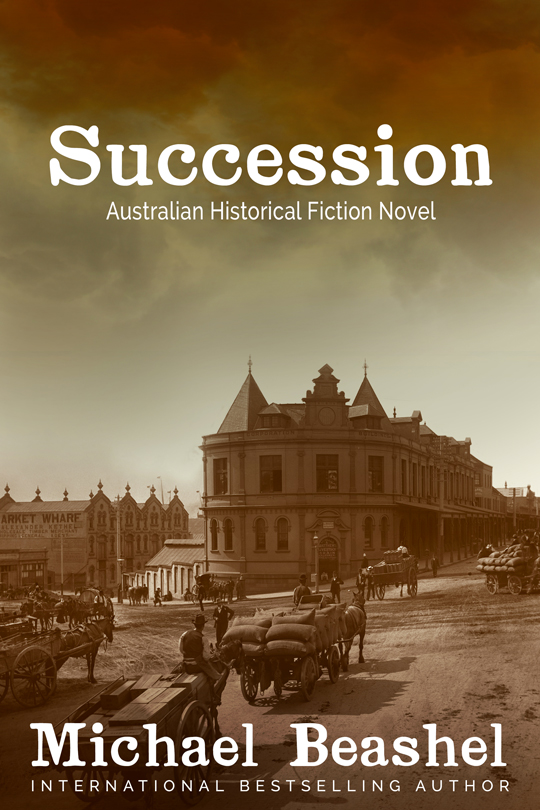 The third novel of The Australian Sandstone Series: John Leary is now a giant in the NSW building industry.

Leary Contracting must build it—the tallest hotel Sydney has ever seen. At 55, John Leary employs both his sons in his construction company, but the one he favours is his first-born, Richard. Meanwhile Richard’s half-brother, Brendan, gains the respect of the Leary workers because he has ‘bricks in his blood’.

John begins the massive hotel project, overcoming city red tape and the jabs of his fiercest competitor. The Imperial dwarfs all around it, with hundreds of workers busting their guts to finish the brutal program. Richard, charming but unreliable, marries well and dazzles the Sydney society of 1885, while Brendan proves himself tougher than he looks whenever real work is required.

John must choose which of his sons will lead Learys into the next century. Only after the Imperial is completed does he make his decision. An Amazon best seller. 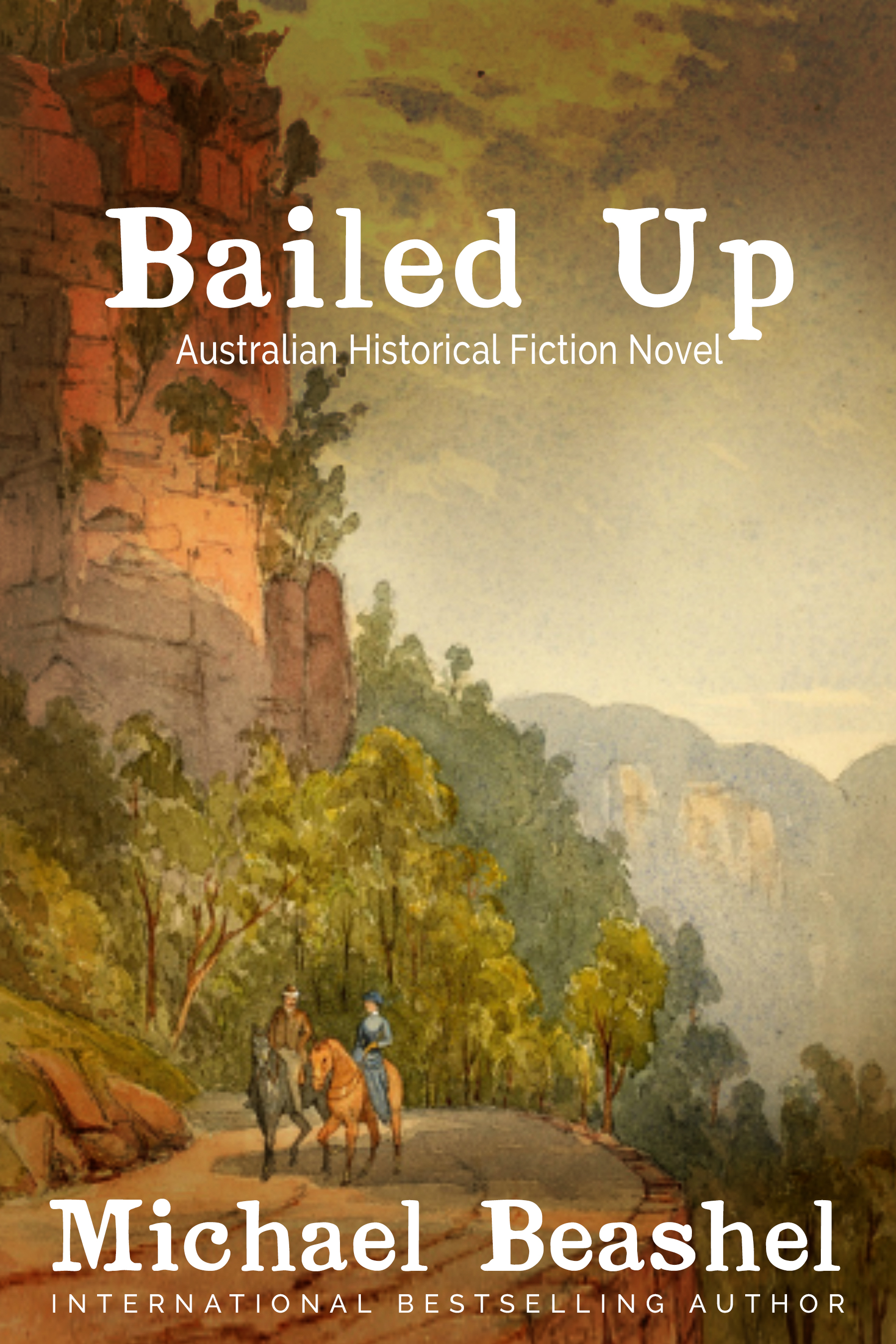 The fourth novel of The Australian Sandstone Series: Featuring a major character from the first three novels.

To Irishman Gerry Riordan, a pint at the Drawbridge Hotel in Cork makes the ideal end to the working week, and one winter night in 1828 he has good reason to celebrate with his friend, Lawrence Toole—Gerry is now a certified stonemason. Next day he will deliver gold tabernacle doors to St Mary’s Cathedral, and dare to ask the beautiful Anne Donovan to marry him.

But by the next night the gold has been stolen, Lawrence Toole lies dead and Riordan is accused of theft and murder. Anne, his boss’s daughter, is the only person who believes him innocent.

Riordan escapes hanging but is transported to New South Wales. A convict in irons, with a flaming temper, he is forced to labour on the colony’s toughest project, the Great North Road. As he begins working in stone again, a charming young woman, an enigmatic overseer and two convict friends seek to open his eyes to a more promising future. Meanwhile, offenders who framed him for the crimes in Ireland are also in the colony. Is there really any hope for Gerry Riordan to rebuild his shattered dreams? An Amazon best seller. 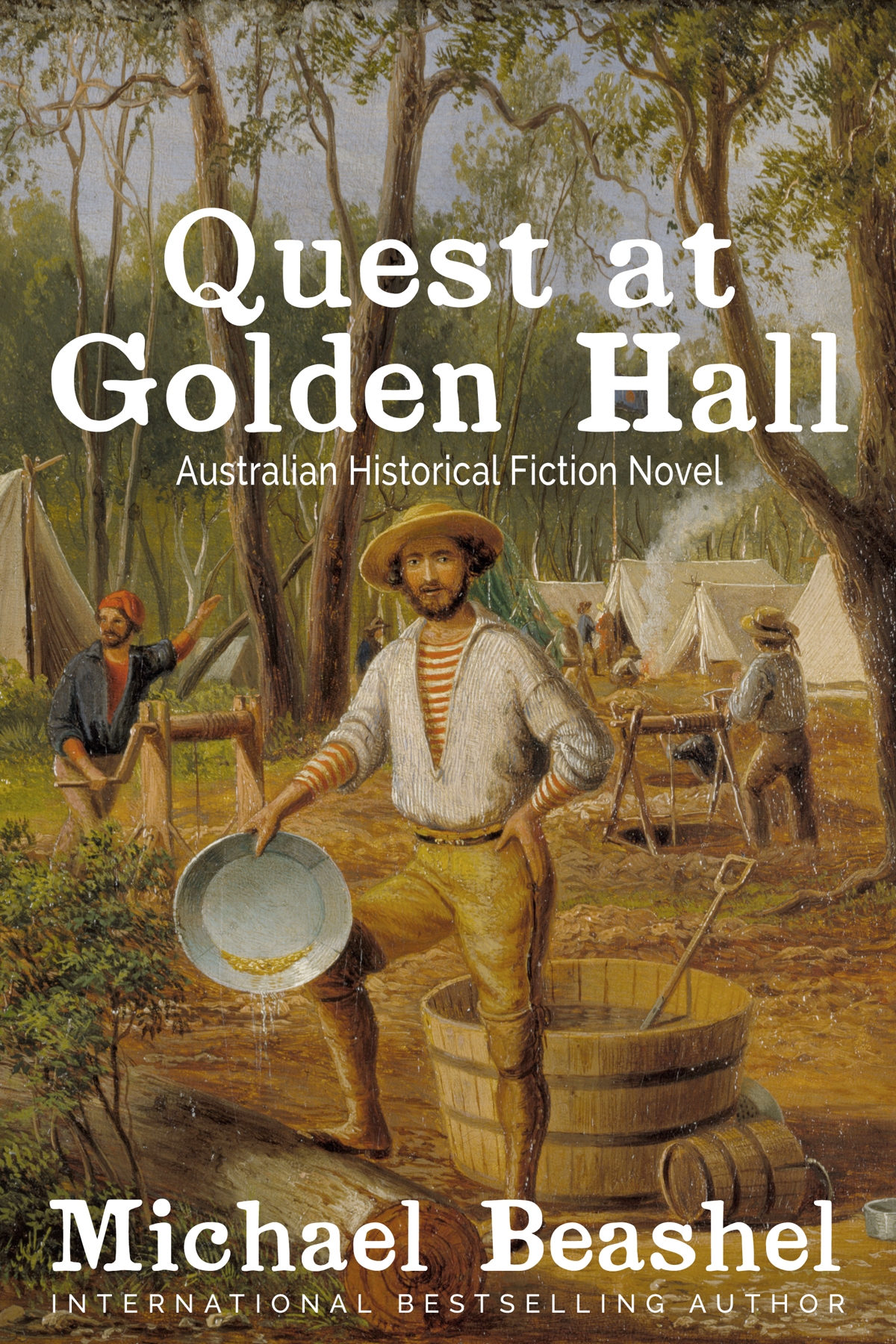 John Leary’s mansion would be a lonely place after the death of his clever and beautiful wife, Clarissa but for his little son, Richard. The tall, handsome widower spends more time entertaining Richard than he devotes to his successful business, Leary Contracting, and his partners and family are worried. Is John losing his edge in 1850s Sydney’s highly competitive building industry?
However, just as rivals are about to take advantage of John’s indifference, his spirits start to awaken. More than one person is watching his house, Golden Hall, and he suspects their motives. True, Golden Hall with its magnificent views from Point Piper is an enviable abode. And the widow Mary Harrigan, who once lived there, could be forgiven for hanging around it. But John is convinced that she and another suspicious character are after one thing: gold. And they seem to think it’s hidden in John’s house.
When Mary Harrigan enlists the lovely Catherine Ryan in her quest, John shakes off his lassitude and springs into action. He has a quest of his own, that will affect both his home and his future happiness. 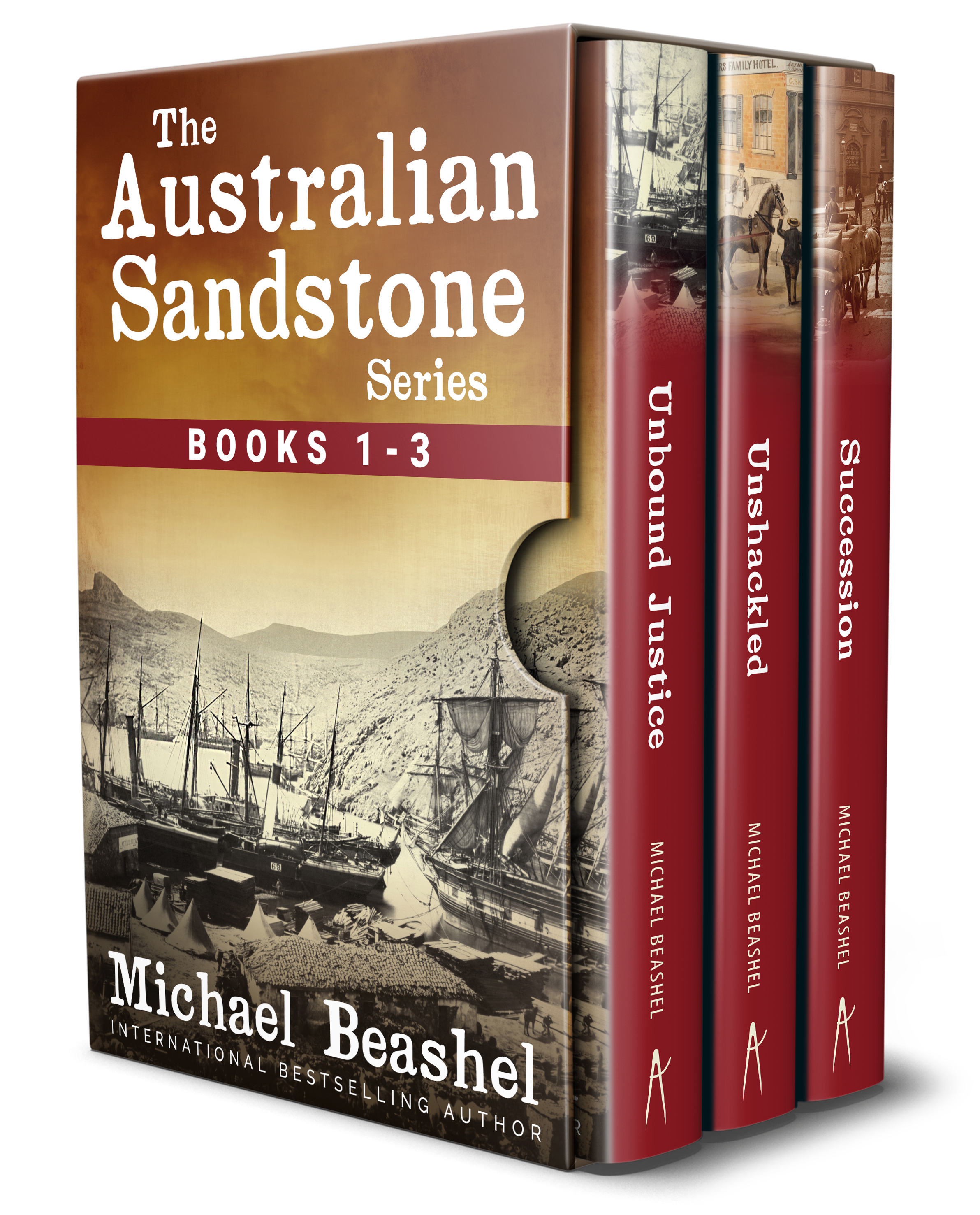 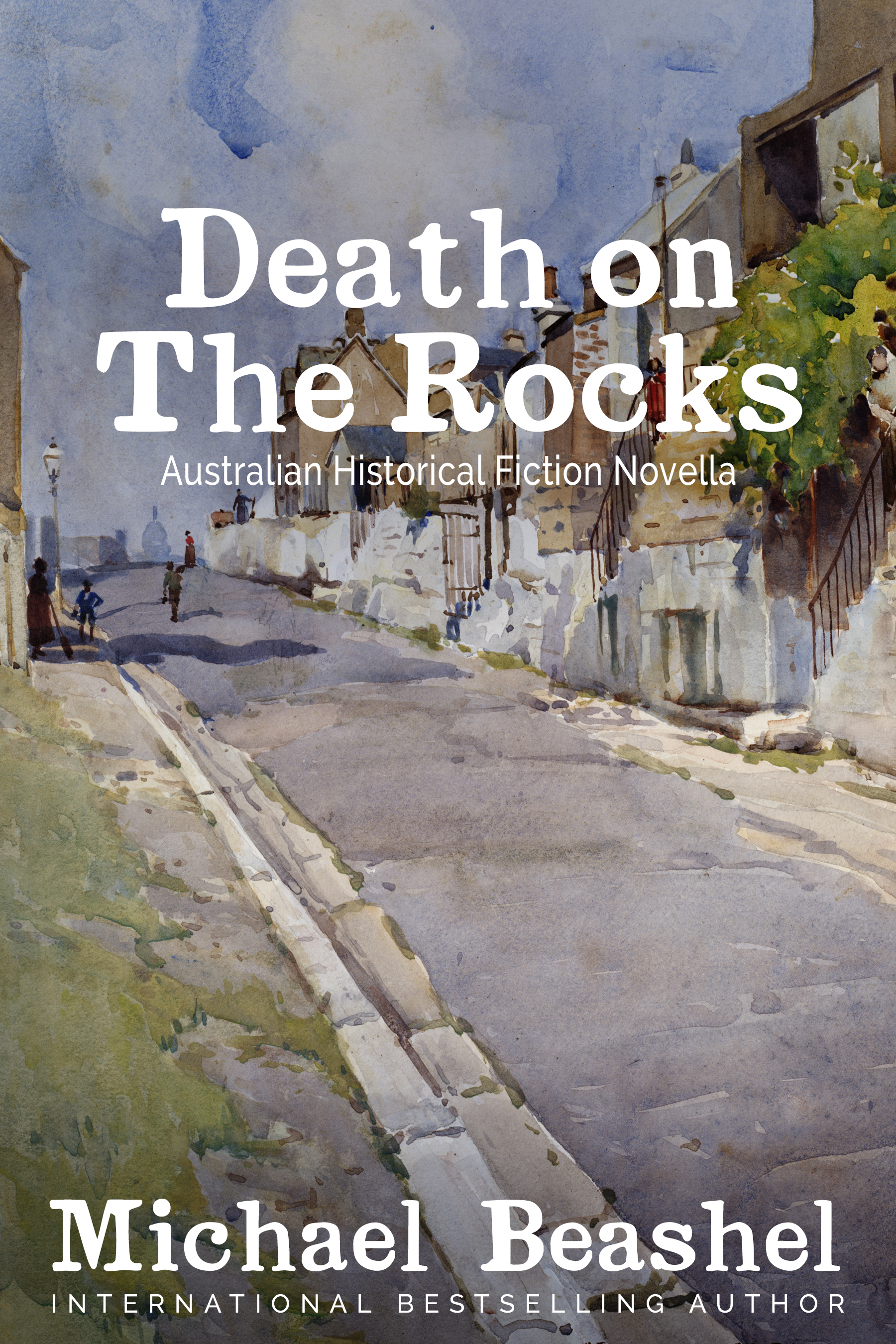 Death on The Rocks- A Novella

Publican Judith Sampson runs a tight ship at her New Liffey hotel. The Rocks, Sydney, in 1824 is not a place for the faint-hearted. Sharp eyes and quick wits are needed to survive in this boiling cauldron of new colonials.

Judith is intrigued when a grain trader is murdered. Then, when her lodger is slain—a young and handsome American whaler—and nothing much is done, she is compelled to act. In the dangerous and debris-strewn lanes of The Rocks, street women and gamblers cross her path, but her investigation peels away the barnacles of lies and jealousy to uncover a shocking link between a pair of lovers and the murders of two men.

Judith’s livelihood is attacked and the constabulary tries to put this brave investigator aside, but she is determined on justice for the victims, whatever the cost to those left behind.

Michael Beashel is Sydney-born, and his Irish forebears immigrated to New South Wales in 1863 and settled in Millers Point. He spent his youth in Bondi, is married and lives in Sydney’s inner-west.

Beashel was head of Asset Development for a global accommodation services company registered on the NYSE and has made his mark in some of Australia’s iconic construction companies. In Sydney, he has restored government buildings such as the Customs House and the Town Hall and completed commercial buildings in the private sector. In SE Asia, he managed a construction division that built apartments and hotels in Bangkok and Ho Chi Minh City.

This industry—its characters, clients, trades people, designers, and bureaucrats—provides rich material for his Australian Historical fiction writing. He has an eye for the emergence of Sydney’s built form, from the early days of the colony to the present, and a love of construction. He says about his writing, ‘It’s a passion. I revel in using the building industry as a tapestry to weave a great tale seasoned with historic facts and memorable characters. Human shelter is an essential need and I suspect people have a fascination for understanding its context and construction within their societies. Australia still is a young country but there are many, many outstanding building stories.’

Beashel holds a B. App. Science (Building) from Sydney’s UTS and is a member of Writing NSW. Beashel finds his excitement in military history and Rugby. He’s sailed in Herons but leaves the racing and honours to other family members!

Unbound Justice, an Amazon ranked International Best Seller, is his first novel and the Books 2 and 3, Unshackled and Succession are all part of The Australian Sandstone Series.

Beashel has featured on Australian radio and has appeared in print in The Last Post, an international magazine for Veterans and Afloat, an Australia wide sailing magazine.

‘There’s a building industry context in the novels and there were predictable devices I could have used- carpenter’s tools, surveying equipment, cranes or building elements such as timber, bricks, metal etc., but I chose the divider.

It’s a tool for measuring and that’s essential in all building. It also happily portrays a symbol very much like the first letter of Australia.’ 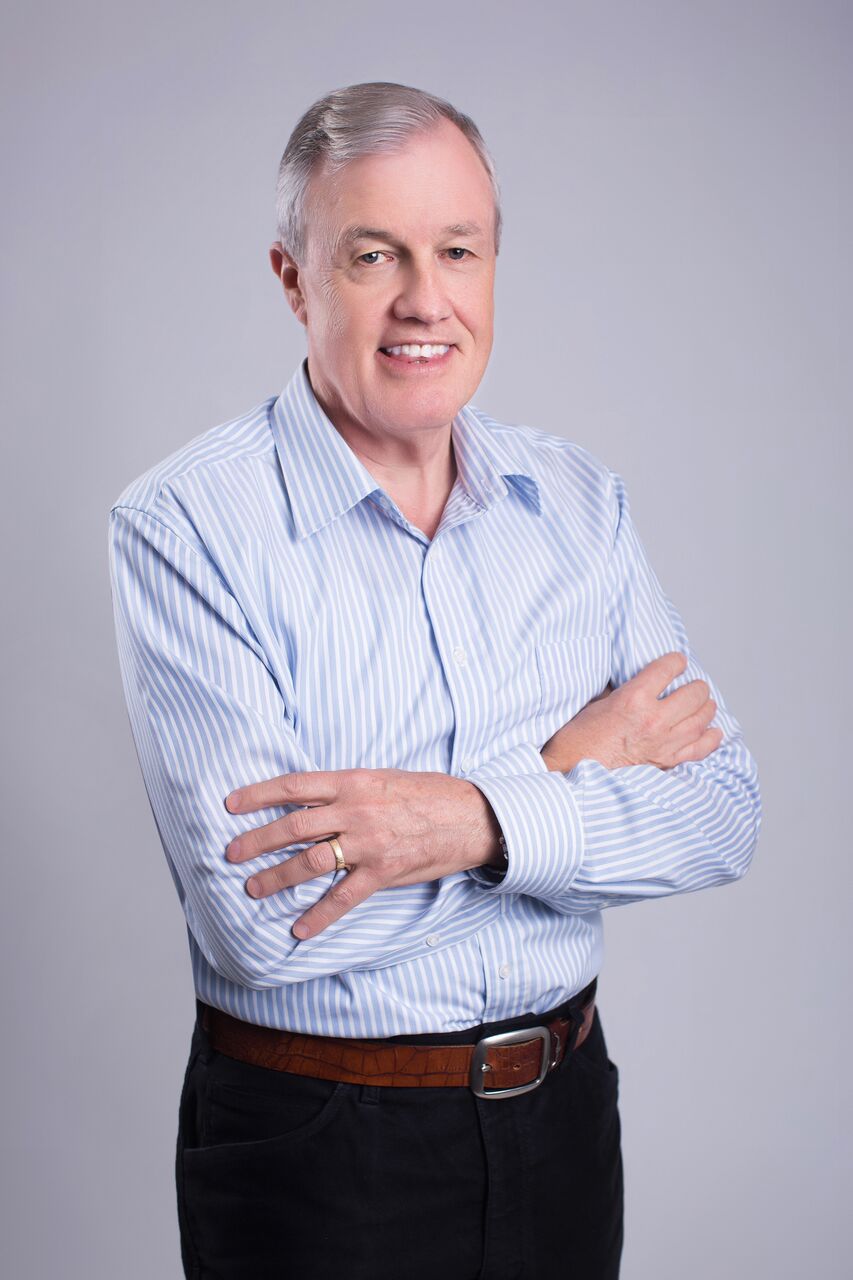 Keep up with important news and updates from Michael Beashel and anything related to the Australian Sandstone Series.